In September 1959 “All Nite Long Part 1” b/w “All Nite Long Part 2” by Robert Parker was released on Ron 327.  In the October 5, 1959 issue of Billboard magazine the platter was reviewed as, “Driving blues is handed a solid reading here by the band, with Part II featuring some wry comments from a member of the band.  This could appeal to the blues market as well as the pop.”  Note the two Ron label variations shown below.

“Don’t Mess With My Man” b/w “Set Me Free” was released on Ron 328 in December 1959.  The December 14, 1959 issue of Billboard magazine gave this description:  “The chick shouts with a determined message:  You can have my husband, but please don’t mess with my man.  Good beat, and wild honking horns; but unsuited for radio.”  Now why did they say that?  The first time I ever heard it was on the radio – on the Sunday night radio show that Alan Lee used to do on WQSR in Baltimore.  Also note that the copy shown here has been autographed by Irma! 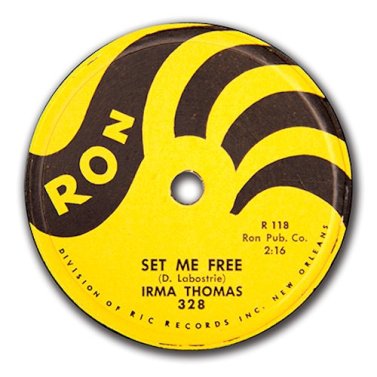