Bell 120 was a budget version of Jan and Dean’s “Baby Talk.” I wondered if “Tom & Jerry” was a pseudonym for Paul Simon and Art Garfunkel before they became famous under their own name. The reason is that Bell issued a song called “Hey Schoolgirl” by Tom & Jerry in 1958 that really was S&G. But, while “Baby Talk” from the next year is also credited to Tom & Jerry, the actual identities of the singers are unknown. Such was the world of budget record labels.

Note that this release, which was issued in August 1959, came with a picture sleeve. The flip side was a cover of Lloyd Price’s “I’m Gonna Get Married” by Ronnie Lawrence.

A reader contributed these images for us to enjoy.  It’s an April 1960 issue on Checker 951 titled “Crawdad” backed with “Walkin’ and Talkin'” by the great Bo Diddley.  I’m not used to seeing the font used on Bo Diddley’s name on Checker.

From July 1959 here is Little Walter’s “Everything Gonna Be Alright” backed with “Back Track” on Checker 930.  Again here is Checker trying to use up their different styles of labels at the end of 78 production. 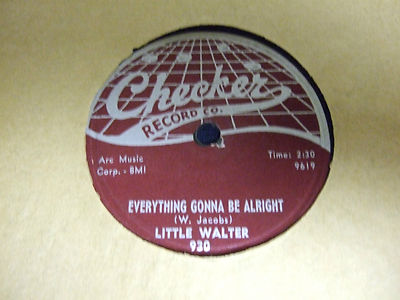 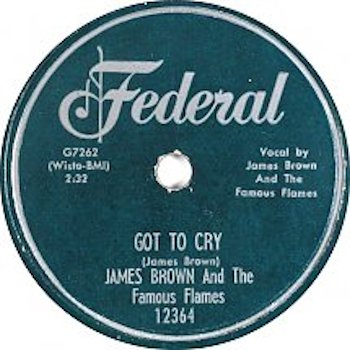 In July 1959 Cobra records released their issue no. 5032, “All Your Love” backed with “My Baby’s A Good’un” by Otis Rush.  “All Your Love,” which features a spine-tingling guitar solo, is not the same “All Your Love” that was on the same Cobra label two years before. 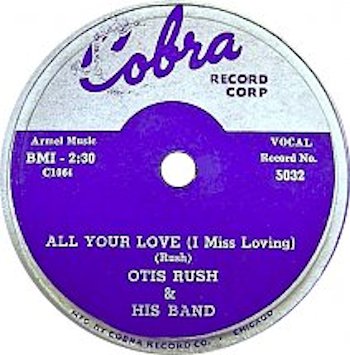 “Sugaree” backed with “Rain Down Tears” by Hank Ballard and the Midnighters on King 5215 was issued in June 1959.  As far as I can tell there were no King 78s released into 1960, although there was at least one Federal 78.